"The objectives of this research were to test the effects of cereal forage species and stage of maturity on forage nitrate concentration."

Cereal forages have become an increasingly economical source of winter feed for livestock producers, comprising 11% of all hay harvested in Montana (Montana Agricultural Statistics Service, 2002). In 2001, 480 thousand tons of small grain hay was produced in Montana, a 19% increase from 2000. Cereal forage production and harvest management techniques are similar to those required by alfalfa (Helsel and Thomas, 1987).

Livestock producers should be concerned with nitrate concentrations when feeding annual cereal forages. Nitrates typically are higher in immature plants and decrease with advancing plant age (Cash et al., 2002). Khorasani et al. (1997) determined that barley had the highest forage quality followed by triticale and then oat. Barley has often been determined to have higher forage quality when compared to oat, wheat, or triticale (Cherney and Martin, 1982; Cherney et al., 1983; McCartney and Vaage, 1994). In addition, Khorasani et al. (1997) found that the nitrate concentration in barley and triticale declined rapidly with advancing maturity while the nitrate concentration of oat remained stable.

Nitrate concentrations at boot and anthesis stages of maturity were similar to each other but higher than the harvest stage of maturity. Barley forage NO3 - N was similar to emmer, triticale and an experimental wheat x spelt cross and lower when compared to oat and spelt forage. Also, NO3 - N concentrations of various cereal forage species respond differently at boot, anthesis and harvest. This implies that different harvest management must be implemented for oat when compared to other cereal forage species. 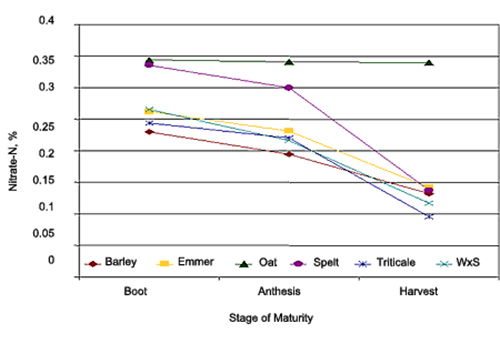