Variety trials are an important source of information for producers when deciding what forage species to plant. In Montana, many trials have been conducted over the years, evaluating many types of forage species. This project included 39 different cultivars of perennial grasses, from 13 different species. Species were established in April, 2006 in Moccasin, MT, and yield data was collected from 2007 through 2015. The values show dramatic differences in yield performance, with some species producing anywhere from approximately 4-6.4 T over the 9 year period, to the highest performing species producing a range of 11- 13.3 T over the 9 years. This data will be helpful in determining the highest producing varieties for similar climates in Montana.

Seed costs represent a significant portion of the overall costs associated with perennial forage establishment. When establishing a new pasture or hayfield, it is not uncommon in Montana to expect it to last well over 10 years. That is why the decision of what species to plant becomes so important.

Variety trials have been conducted for many years in Montana, as well as in many locations throughout the state (Alfalfa Varieties). The data from these trials helps producers determine which species is most suited for their particular environment. Moccasin, MT, the location of the Central Agricultural Research Center, is commonly used as the dryland site, as it receives 15.38” of precipitation annually, with 9.0” received in the March-July period.

Performance of forage species at this site provides insight as to how forages will perform on similar dryland sites elsewhere in the state. The majority of the 39 cultivars that were established in this trial are typical of species used in pasture and hay production throughout Montana and the surrounding region. Some of the entries are disturbed sites reclamation species.

In April, 2006, 39 perennial grass cultivars were established on shallow calcareous clay loam soils over gravel (Judith Soils). The cultivars were established by till plant recropping after barley with a double-disk drill in 11.5 inch row spacing.  Fertilizer was broadcast most years as straight urea or a NPKS blend. The trial was harvested each year from 2007 through 2015, and yield measurements were recorded.

Yield results from the first two, and last three years are presented in Table 1. The highest yields were observed in the first year after seeding, common in dryland perennial forages. Even with some of the less robust, and slower-establishing species like Altai wildrye and bottlebrush squirreltail, it is not unusual to experience these higher yields due to decreased weed competition.

The highest yielding species were the pubescent and intermediate wheatgrasses, yielding an average of 11.23 and 12.07 T, respectively, over the 9 year period. The Russian wildrye entries had the lowest yields of the 9 year period, producing an average of 5.72 T total for the 4 variety entries. Russian wildrye yields can often be doubled by increasing the inter-row spacing to 24 or more inches in dryland seedings. Crested and Siberian wheatgrass had yields similar to the pubescent and intermediate wheatgrasses, which is not surprising based on performance in other trials, as well as on-farm experiences. The bluegrass entries, big bluegrass and Canada bluegrass, also performed quite well, producing an average of 11.52 and 12.29 T, respectively, over the 9 years.

It is also interesting to note the differences amongst varieties within species, an important factor to consider when decision-making. For example, the two big bluegrass entries, ‘Sherman’ and ‘9081633’ had very different yield results. Sherman produced a total of 13.66 T over the 9 years, while ‘9081633’ produced 8.52 T. While still acceptable yields, there is a marked difference. Similarly, ‘Pryor’ and ‘First Strike’ slender wheatgrass both produced over 10.5 T, while the other two slender wheatgrass entries ‘San Luis’ and ‘Copperhead’ produced closer to 7.5 T.

This information will be useful to producers on dryland sites when determining what cultivar of perennial grass to plant for their pastures or hay fields. There are drastic differences observed both amongst species, as well as between varieties within a species. This study did not evaluate palatability and quality. 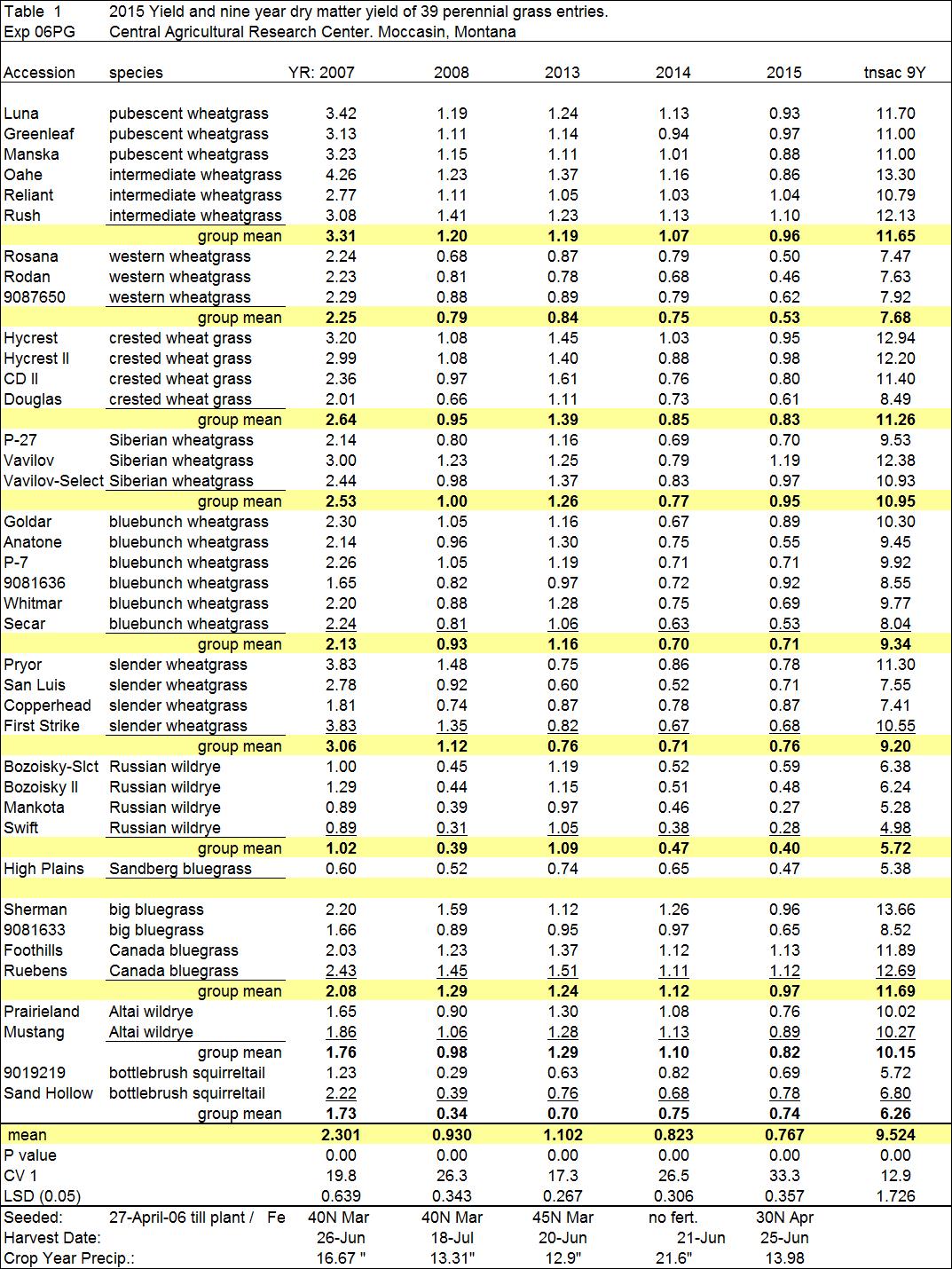 Researchers would like to thank the Montana Agricultural Experiment Station for supporting this project.