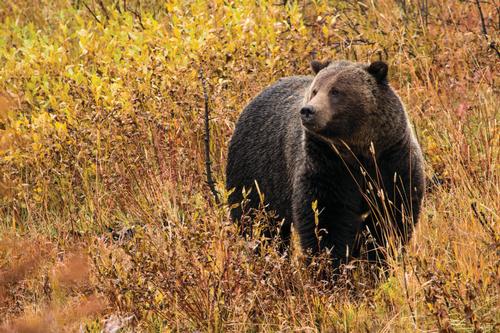 Grizzly bear populations across Montana are rapidly growing and expanding into historic ranges. This expansion increases the likelihood of human-bear conflict, especially during hunting season, because while there are many well-documented safety practices for recreating in grizzly country, being visible and making as much noise as possible isn’t the best approach for a hunter. At least not a successful one.

As hunters, we put ourselves inherently more at risk of a dangerous bear encounter. We’re more active in low light conditions, trying to remain hidden, move quietly, sound and smell as much like game as possible, and we are in the field when the bears are most active and calorie loading for the winter (hyperphagia).

So, what can hunters do to be more bear aware during the hunting season?

Avoid Hunting Solo
First and foremost, the best thing one can do during hunting season is hunt with others. Research shows that traveling in groups can reduce the likelihood of a dangerous bear encounter. However, for many this isn’t an option. If you must hunt alone in bear country, let someone know your plans and have a way to check in and send an emergency signal.

Be Alert and Spatially Aware When in Bear Country
Spend more time looking for fresh bear sign (e.g., tracks, scat, overturned rocks, tree markings, and concentrations of preferred bear foods). If you notice signs of bear activity or presence of a carcass
or scavenging birds, use extreme caution and try to avoid the area. When possible, avoid pushing straight through areas without a clear line of sight, and give thick and shady areas a second look.

Keep a Clean Campsite
Properly store food in bear-proof containers, hard-sided vehicles, or hang food away from camp at least 10 feet high and 4 feet away from a vertical structure. Cook food and strain and toss water at least 100 yards from the downwind side of the tent. Do not bring anything into the tent that has a scent and do not sleep in clothes you cooked in. In bear country, open spots with long, clear lines of sight are best for setting up camp. If the camp is more accessible, a portable electric fence surrounding camp is also an option.

Make Some Sacrifices to Maximize Safety
Many hunters know the last hour of daylight as that magical 'golden hour.’ However, coming back to camp after dark or tracking an animal shot at last light is difficult enough without having to worry about bears. Butchering and packing an animal at night is a bad combination and just adds an element of danger. When hunting in bear country, forgoing a few minutes of daylight or waiting until morning to finish tracking an animal may not be ideal; on the other hand, a little extra caution allows for an enjoyable and safe hunt.

Communicate with Other Hunters
Often in the field, we may come across fellow hunters or have friends who hunt in the general area. In these cases, sharing detailed information on when and where grizzly bears have been seen and/or fresh sign has been observed can be invaluable and may very well save someone’s life.

Carry Bear Spray
Regardless of the activity, when in bear country, carry bear spray and make sure it’s within reach and that you’re familiar with how to use it. Research has shown pepper spray to be a proven and valuable deterrent tool against bears. Use a weapon only as a last result. Attacks often happen quickly and in close range and wounded bears may intensify and prolong the attack. If you have to kill a grizzly in self-defense, or experience an attack, leave the scene and report the incident immediately to local authorities. A bear encounter can be reported to a regional Montana Fish, Wildlife & Parks bear specialist.

Unfortunately, regardless of safety precautions, encounters do occur. If you encounter a bear, stop and assess the situation. The bear’s behavior - not the species - should first determine how you respond (i.e. is the bear is aware of you or not? Is it threatening, curious, or fleeing?). Do not run or approach the bear. As a last resort, if physically attacked by a surprised/agitated grizzly, lie face down, covering your neck and head with your hands and arms and remain still until the bear is gone. If you have a backpack, leave it on to protect your back.