Dryland grass and hay production have sharply declined in Montana over the past three years due to droughty conditions. Many ranchers were forced to reduce herd numbers if they were unable to locate and afford additional pasture or hay. In Montana, the application of fertilizer to dryland grass pasture or rangeland is not widely practiced, and during recent conditions, most producers have cut back on inputs such as fertilizer to reduce costs. Several studies in the northern Great Plains have demonstrated an advantage to pasture fertilization, however experts argue the economic benefits and long-term ecological effects of fertilizing dryland grass. For dryland grass or cereal production, the major nutrients required are nitrogen (N), phosphorus (P) and potassium (K). Soil levels of N, P, K and other elements are typically low in many soils, and these are continually removed by grain, hay or pasture production.

In a previous trial near Havre, MT in the early 1970’s, researchers applied 0, 50 or 100 pounds of N fertilizer to replicated plots of 12 grasses – including both native and introduced, and rhizomatous and bunch grasses. Fertilizer was applied once in the fall during the year of establishment, and forage production was monitored for six years. In both dry (1972 and 1977) and wet (1973 - 1975) years, the fertilized grasses had better yields. Total product ion was significantly improved for most grasses over the six - year period by a single application of N fertilizer. In most cases, application of 50 (but not 100) pounds of N per acre provided a significant economic benefit. From this study, it appeared that a one - time application of N fertilizer can be a viable management tool to increase forage production of dryland grasses.

Many Montana producers have planted the best grass species and cultivars for improved pastures, but they have not taken the additional management steps of fertilizer or proper grazing systems. In a recent study near Willow Creek, MT, we applied N fertilizer to replicated stands of 12 grasses. The objective of this study was to determine the agronomic and economic benefits of applying N fertilizer to “mid - term” grass stands. The grass plots in this trial were established in 1997, and were not fertilized since planting. During 1997 through 2001, the plots were uniformly harvested in the fall.

These data were further analyzed to compare the economic benefits of N fertilizer application to either haying or grazing. Across all 12 species, the average returns to a haying operation due to N fertilization was about $6 or $8 per acre for the application of 50 or 100 pounds of N per acre, respectively. Among individual grasses, the gross income response to N fertilization ranged from $17 to $77 per acre. Some grasses, such as Luna pubescent wheatgrass and CD - II crested wheatgrass, had a “stair - step” response to 50 and 100 pounds of N per acre. Other grasses had little response to fertilization.

When the effects of N fertilization on pasture production were evaluated, the differences in response to N were less striking. At 50% grass utilization (“take half - leave half”), the average AUM production per acre were 0.7, 1.4 and 2.0 for the 12 grass stands fertilized with 0, 50 and 100 pounds of N per acre, respectively . Interestingly, the average net pasture value (across the 12 grasses) declined with fertilization. Two of the grasses most responsive to N fertilizer – Luna and CD II – had definite improvements in AUM per acre by fertilization with 50 and 100 pounds of N per acre. For several of the grasses, the costs of fertilization exceeded any gains in AUM production.

Forage quality of Luna pubescent wheatgrass and CD II crested wheatgrass was analyzed after the July 2002 harvest. Forage protein levels of both varieties were improved by N fertilization, but the response was greater in CD II. Interestingly, the forage protein level of unfertilized CD II was equivalent to that of Luna fertilized with 100 pounds of N per acre. Fiber concentrations of both grasses appeared to have no response to fertilization, therefore predicted energy (ADF) and intake (NDF) were not changed by N fertilization. CD II had slightly lower fiber levels than Luna. The concentrations of in vitro digestible dry matter (IVDDM) were improved by fertilization with 50 or 100 pounds of N per acre. Despite the inferior protein and fiber levels of Luna, this variety had superior IVDDM levels.

Based on these studies it appears that a single application of N fertilizer can improve dryland forage grass production. In 2002, spring moisture conditions were dryer than normal, however most grasses had increased production by fertilization. A positive economic benefit to N fertilizer was shown for several grasses, but was most pronounced for those that were high - yielding. Further, the economic benefit during the year of fertilization was greater in a hay system than in a pasture setting. Obviously with the dry conditions encountered in 2002, some grasses may not have fully responded to N fertilization, and this trial will be monitored in future years. The re commended N requirement for introduced grass pastures is 20 to 25 pounds (soil level plus applied fertilizer) per acre for every ton of grass hay removed. For most producers, N fertilizer can provide a striking improvement in grass production, particularly if good moisture conditions return in 2003. 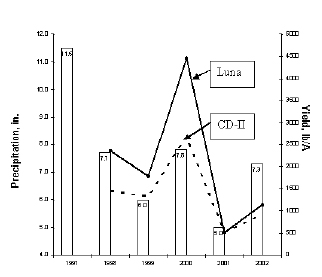